I know growing up I looked up to many athletes in terms of integrity, how they play, and as well as many other things. However, the biggest thing when I was little, was how damn cool they were. I remember being in kindergarten and using temporary hair coloring to make my hair different colors for school because I thought Denis Rodman was the man. Now, of course, I have learned that he is far from cool and there are many cooler guys in sports.

*The only criteria is that they have to be an active athlete.*

LeBron James is kicking off my list at a solid number five. I do not care who you are, you have to respect LeBron, on and off the court. On the court he may just be the greatest to ever touch the hardwood, and he does it with class. LeBron plays with so much heart and intelligence that it is no wonder this guy has lasted for so long and why is going to continue the success in his career.

Off the court, LeBron is just as awesome. This guy continuously gives back to his community that taught him so much. Not to mention the fact LeBron is the first to ever ink out a lifetime deal with Nike. That brings me to my next point. This guy knows what looks good. All the way from his outfits for game days, workout clothes for clothing line, to his shoes (He also has my favorite commercial of all-time).

LeBron just knows. Not to mention he is an awesome father to his children, besides the fact they are not allowed to play football or have phones, but he believes its for their best interest.  I wish I could rank him higher, but there are just some things you can not get past with guy. LeBron gets this low of a rating due to the fact he can be a bit of a douche and he kidnapped everybody for an hour and a half just to break the entire state of Ohio’s heart.

This MLB all-star cracks the list at number four. Harper is not the best in league, in my opinion, but he is definitely in the top ten. Harper can hit, field, has an absolute cannon, and plays the game the way it should be. The guy puts his heart in the game for all nine innings. Baseball has been getting a bad rep here lately for not being fun and exciting, but with guys like Harper who do what they do night in and night out the game will be back soon. Harper does not care about his body, his image, or anything besides getting the W.

Harper is also noted for being a very charitable man and cares about fans in Washington. Harper may also have the best style and hair in all of baseball. Yes, Bryce Harper is a badass, but has a soft spot for his mom. Every time Harper goes yard he flashes the sign for love just for his mom, and thats pretty cool. 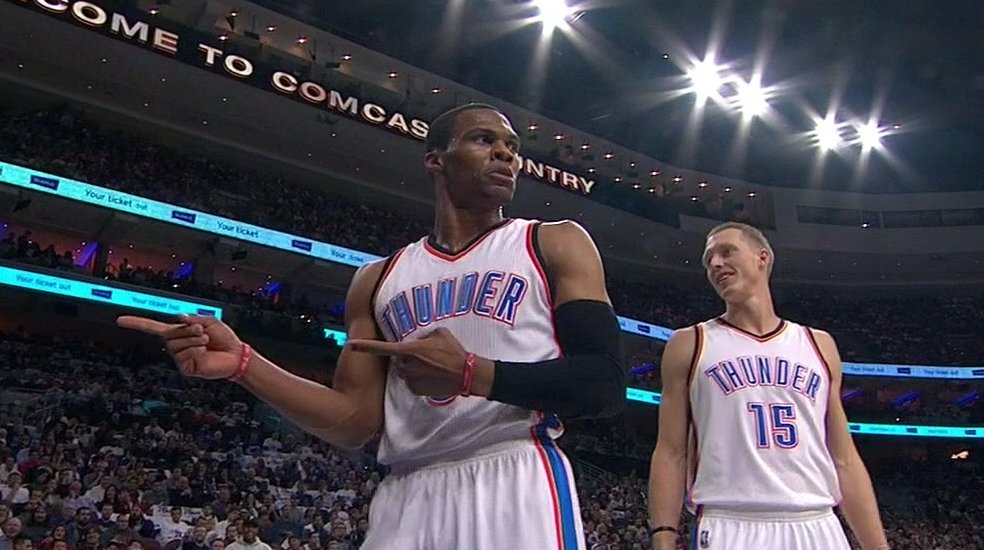 Possibly the most arguable on the list. Russell Westbrook can be argued to be a solid number one or two all day, despite being the missing Ninja Turtle. However, for this list I do believe he is a good fit at number three. The Thunder triple double machine may be the most explosive athlete of our time. The high flying point guard throws down some incredible drunks, has acrobatic finishes, and is also extremely unselfish. Russ also does not care who is playing against. He will give it his all, and the success is apparent. Russ does not have your typical story of an NBA superstar. He was very tiny and struggled to make his high school team and lost his best friend. Russ was not heavily recruited, but it drove him to be better.

Now we see Westbrook rocking the craziest outfits we have ever seen, and just launched his own clothing line. Westbrook uses his platform to show his crazy sense of style (below is a crazy example). 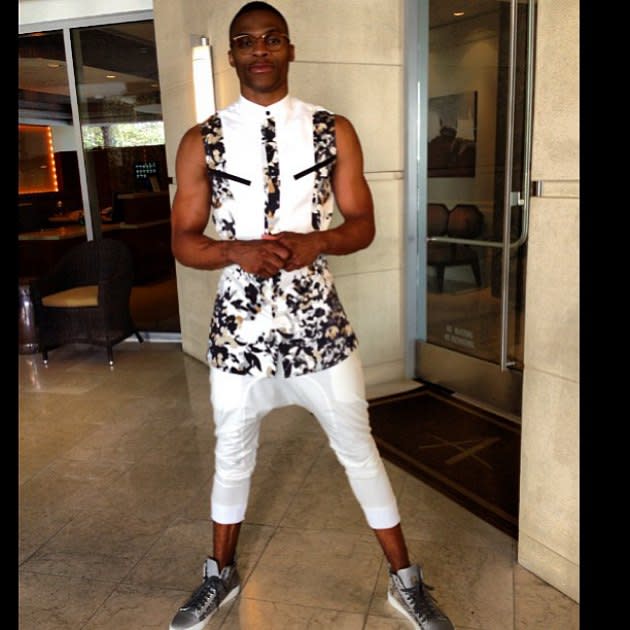 Westbrook is also very charitable and has made the most charitable donation from a former Bruin in history. Not to mention Westbrook has the Why Not Foundation to help tackle the issue of childhood illiteracy issue in this nation.

Ahhh, Antonio Brown. This man may be the secondary definition of cool. This Pro-bowler wide receiver is an animal on the field and carries himself well of it. In the picture of above he is being driven to a the Steelers pre-season camp in one of his many priceless cars. Brown has a unique sense of style that can be seen in his outfits, his cleats, cars, and sometimes his hair (especially the lego hair).

Brown is a touchdown machine and is my all-time favorite player to have on fantasy (the guy can score forty points any given night). Due to the numerous accounts of Brown making the other teams look stupid, he has became to the touchdown celebration king. Brown is a very charitable man who gives back to his home community as well as Pittsburgh.

These last three stars were a close rate, but JJ was the best fit. JJ Watt is a superstar defensive end for the Houston Texans. Watt has been making plays on both sides of the ball for years. This hard nosed player was not always this huge freak of nature; in fact, he was the exact opposite. JJ Watt was maybe 200 pounds soaking wet. He went to the University of Central Michigan where his hard work would later help him transfer to the University of Wisconsin. Watt was not a coveted recruit in high school, but is no an NFL superstar.

However, Watt is an amazing human being. The city of Houston was devastated by Hurricane Harvey causing damage throughout the city; however, Watt did not sit back and watch his city suffer. Watt took the initiative to raise $200,000 for the people of Houston. However, what he accomplished was well above his goal. Watt ended up raising thirty-seven million dollars in less than three weeks. JJ Watt has it all. He has the style, swag, skills, and humility of today’s coolest athlete. There are so many examples of how badass, cool, and caring Watt is that it would be impossible for me to post the best examples.

Remember this list completely opinionated and I would love to hear your top five. Thank you once again for joining me on this Friday. Remember to stay tuned for fresh daily content from myself and the rest of the Mid-American Crew.