This year college football saw the most unlikely underdog of all time. The University of Central Florida, located in Orlando, Florida, went 0-12 just two years ago. Then, in 2016 the Knights hired a new head coach by the name of Scott Frost. Frost led the team to a six-win season and a bowl game (which they lost). However, 2017 was something nobody seen coming. The Knights polished off a perfect season and knocked off powerhouse, Auburn. This led to a huge discussion as to why they were not given an opportunity to be in the CFP (College Football Playoffs).

This argument is a very valid one, but the college’s response to this is the dumbest, most asinine thing ever. The Knights are now claiming themselves as the national champions purely on the fact they had a perfect season and beat Auburn. I am sorry UCF, but that doesn’t classify you as champions. 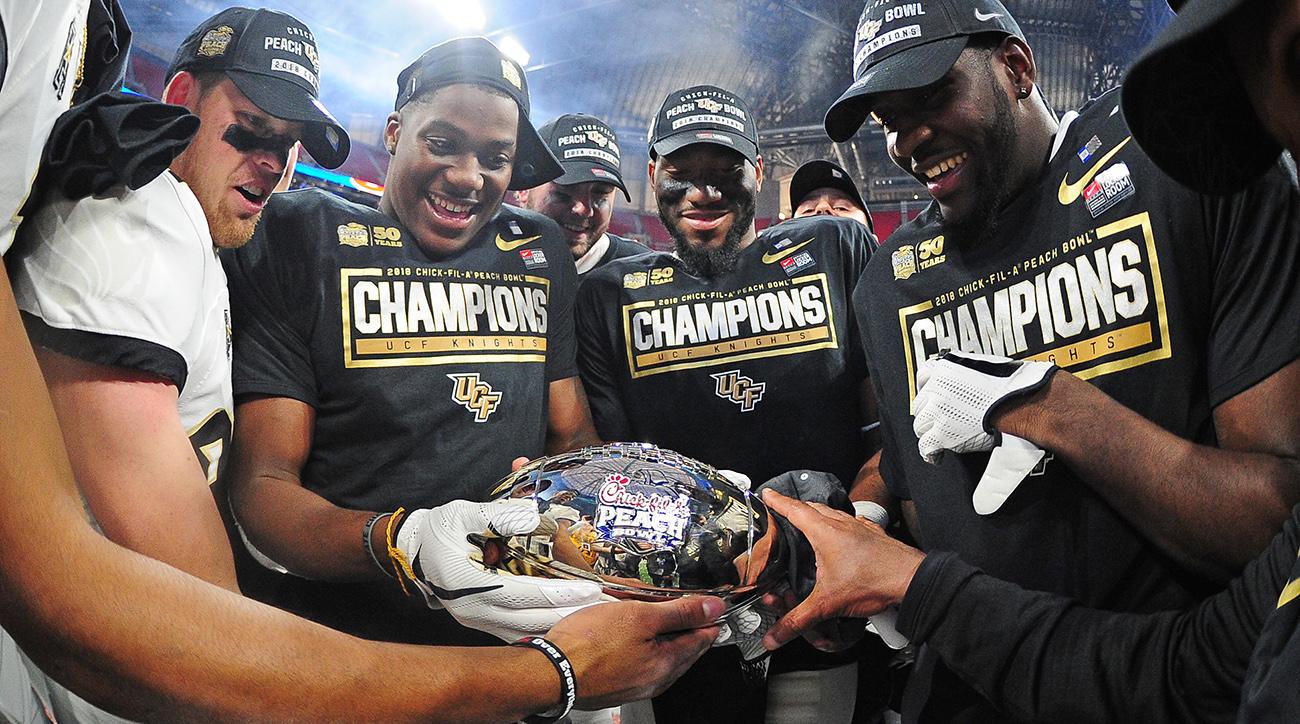 The UCF Knights belong to AAC (American Athletic Conference) which is a “Group of Five” conference. This conference has a few quality teams such as Memphis, USF, Houston, and a few more who usually are good, but fell from our graces. On the UCF side of the conference, only one team had a winning record (USF). Not counting their bowl game or conference championship, their opponents combined record is 71-64 (.525). This does not pass the eye test for the committee to even consider UCF.

This leads me to my next point of argument, their biggest win is Auburn. Given, that is a huge win; however, that does not dignify the response of calling yourself national champions. Auburn finished out the season 10-4, including beating Alabama (Three losses being Clemson, LSU, Georgia and UCF). Those three losses to me are not that tough. Clemson lost to Syracuse (4-8)….. Syracuse. LSU lost to Mississippi State by 30, to Troy by 3, Georgia (contended for the real national championship) and Alabama (real national champions). Those are some teams that Auburn lost to, but it does not make a case as to why UCF feels so entitled.

This is like the University of Pittsburgh (Pitt) claiming that they should be national champions last year because they were the only ones to beat Clemson. Now Pitt was not an elite team, and even top-ranked teams have off days. Like Bama did this year against Auburn. Just because you beat somebody who beat somebody else does not make you better than them. Football is a game of matchups and strategy, and any team can be beaten any given day. UCF may be doing this because they believe that should have the right to play in the playoffs, but even if they were given the chance, I do not see them winning the championship.

The one thing that this does bring up is the CFP format. Since the CFP was introduced in 2014, there has been an issue with the format and the process in which the teams are selected. There have been many different proposed formats such as a six-team, and an eight-team playoff. I personally believe that the six-team playoff with the top two seeds getting byes. However, one idea I saw came from former WVU standout quarterback, Pat White.

I 100% agree with this. This brings the excitement back to bowl games and we won’t see as many athletes sitting out in their bowl games. I think the #1 and #2 seeds would not have to play, but past that you have to fight for your spot that the committee sees fit. This gives the people at home what they want and makes it more interesting.

All and all, UCF should have been in the playoffs, but you can’t blame the committee for the snubbing. UCF’s schedule does not pass the eye test for me, and it did not for the committee either. The only shot they have or any other “Group of Five” school has is to schedule tougher games.

Until the format is changed, UCF chillout. You are not national champions, you do not deserve a national championship parade at Disney. However, the real winner is Scott Frost as he has taken over as the head coach at Nebraska. Welcome to the Big Ten buddy!

What is your opinion, is UCF the national champs? Should the format be changed? Let us know in the comments below. Thank you for spending a portion of your time with me on this lovely Friday. Remember to stay tuned in and for fresh new daily content every day from myself and the rest of the Mid-American crew. If you haven’t checked it out yet, give our weekly playlist a listen.

One thought on “UCF, Stop. You Are Not National Champs”