Notice in the title that I said “The Strangest WWE Game Ever” and not “The Strangest Wrestling Game Ever.” That’s because WWE Crush Hour is not a wrestling game. It’s a Twisted Metal rip-off. How are they connected? I’ll let the game’s intro tell you.

I know that this may seem impossible to occur in real life, but hear me out. Raw and SmackDown Live are both currently on USA, but it was recently announced that SmackDown Live will be moving to Fox in 2019. The WWE will regularly be in primetime on network TV for the first time since SmackDown aired on UPN, The CW, and MyNetwork TV (remember that channel?). In addition, WWE has the hit reality shows Total Divas and Total Bellas on E!, and it also has the upcoming Miz and Mrs., also on USA. In addition, the WWE Network has several shows that seem like they would’ve fit right in with Mr. McMahon’s plan in this game. Shows like Ride Along, Swerved, Camp WWE (shudders), and The Edge and Christian Show That Totally Reeks of Awesomeness are shows that could’ve been on several different channels back then (Speed, MTV, Comedy Central, and [adult swim] respectively).

If these are a remnant of Vince’s failed plan to take over television, what could be the key sign of his renewed interest to do this? Simple. The revival of the XFL.

Vince is taking over. You heard it here first.

Sorry for sidetracking there, let’s talk about the game. WWE Crush Hour is a game where WWE Superstars get into combat cars to shoot at each other until they explode. The concept sounds a little fun, and they do take advantage of it. The entrances are just like WWE entrances, and some wrestlers’ vehicles fit their personalities, like Undertaker’s motorcycle. They missed a golden opportunity to put Kurt Angle in a milk truck though.

I know that I said that it was a Twisted Metal rip-off, and it probably is, but I’ve never actually played it myself, so I can’t be 100% certain. The game that I was reminded of was none other than Tanki Online, where many high school computer lab sessions were spent.

The controls are simple enough. On the PS2 version, X accelerates, Square is the brake and reverse, Circle activates a short boost that you can use to ram into opponents, and R1 shoots. In addition, you can fill a gauge by racking up kills to activate an instant death special move that’s activated by pressing Triangle. Each kill triggers a one-liner from the characters. Kurt Angle’s witty “I don’t suck, you suck” stuck out to me. There’s also power-ups like health and additional weapons. Never before have I been so happy to hear Jim Ross provide commentary in anything. He delivers such wonderful lines as  “Brock Lesnar has picked up ‘the Annihilator’” and “Edge has picked up the ‘Twisty Rockets.’” 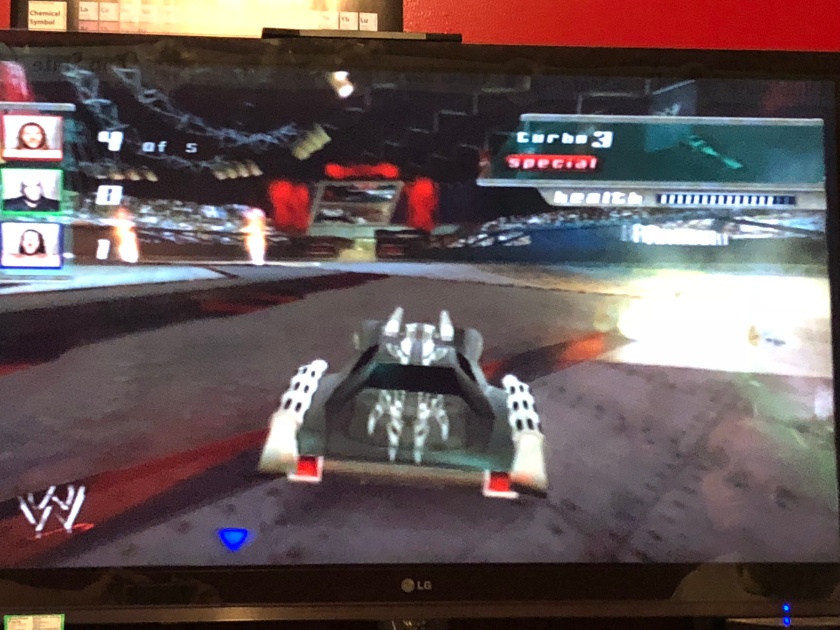 The mode that I played the most was “RAW” (the modes in this game are named after WWE shows or match types), which is a classic deathmatch. First one to a certain amount of kills wins. This rule also applies to the “SmackDown” mode and the “Hell in a Cell” mode, which featured an Egyptian setting for some reason. Another mode is “Hardcore,” where you need to hold on to the Hardcore Championship for a certain time period (about 30 seconds or a minute). One mode that was fun was “Lumberjack,” with its cabin in the woods setting and simple goal of collecting stars. Most of the other modes are simple variations of these.

The career mode is simply all of these modes in a row, and believe me, it is much harder than multiplayer. RAW took me a few tries, but I absolutely could not do “Hell in a Cell.” Either there’s an insane difficulty spike or I suck. Probably the latter. I hear that the final level (spoilers) is a duel with Mr. McMahon, which I imagine would be hilarious.

The graphics are nice enough for the PS2, if not a little too dark at times. As for sound, outside of the main menu, there isn’t any music. That’s a huge letdown, as a testosterone-filled game like this could really use some Kyuss or Megadeth. It also could’ve borrowed from WWE’s musical tastes at the time to give us something truly special.

Taking all of this into account, is WWE Crush Hour a good game? Well, not really. It’s simple enough to play, but nothing about it really says that it’ll be a multiplayer experience for more than two or three sessions. A few more modes with more variety and some music would help it dearly. That said, it was a little bit of fun. For a game under $10 picked up at a local game store, you can’t really ask for more than that.

Thanks for reading! YouTube videos uploaded by Masked Skull IV and Ahsemo.