The Star Wars Universe is very extensive across different platforms including movies, video games, comic books, and more. Let’s talk about some of the best unique droids in Star Wars.

Droids are robots that have artificial intelligence and have a vast number of roles to be played in the universe. There is an abundance of droid types and variations but I want to talk about specific entities of droids.

L3-37 appeared in the movie Solo: A Star Wars, where she was shown as Lando Calrissian’s partner. A one-of-a-kind custom pilot droid, L3-37 built herself after her original owner left her restraining bolt off. She became the best navigation droid in the galaxy and helped Lando on his adventures. Eventually after fighting for droid freedom cost L3 her life, she became a part of the Millennium Falcon forever.

Lone Battle Droid (has no name) appeared in the comic book titled Pathways in Clone Wars Adventures: Volume 8. The droid lives a monotonous life of being destroyed and rebuild as a B1 battle droid that matters to no-one except in the numbers game with all of it’s comrades. Eventually as the battle droid is marching into battle it becomes damaged from an explosion and becomes self-aware. These robots normally have no actual thought process and are controlled altogether remotely. The bump to the head (seen above) severs the connection to the droid and it becomes able to make choices and decisions. Tired of being killed and rebuilt and nobody caring, B1 deserts it’s post and goes on an epic quest. Despite knowing that B1’s battery life will only give it a short time to be free, it chooses to continue going. The droid then gets to show some attitude, compassion, and find peace in a short period of time Then after it perishes with no remaining battery, the droid is found by farmers and gets a happy ending of being given a new life as a ranch hand. The story is good because B1 gets to go through all these conflicts and feelings in such a short time and the reader actually cares by the end of it.

An obvious choice, K-2SO was an Imperial security droid that was reprogrammed to serve the Rebel Alliance in the movie Rogue One. His efforts were key in the plot to steal the Death Star plans which later come to drastically change the war. His accent and rather straight forward personality helped make him a fan favorite following the films release.

IG-11 has appeared in The Mandalorian which is the best piece of Star Wars media in many, many years and plays a key role in the first season. IG-11 is an IG-series assassin droid like IG-88B whose one scene in Empire Strikes Back made him one of the most beloved characters for fans. In The Mandalorian IG-11 goes from being a deadly assassin fighting alongside Mando with task of killing the Child to becoming a nurse droid for the Child, pretty wild character arc if you ask me.

I mean I really couldn’t make this list without R2-D2, one of two characters to appear in every single Star Wars movie. R2 is an astromech droid whose sass and smarts and years upon years of experience enable him to be a key player in so many serious events. It’s interesting to note that R2 has never had a memory wipe so he remembers everything from all the movies plus all the tons and tons of other canon content he was present for. 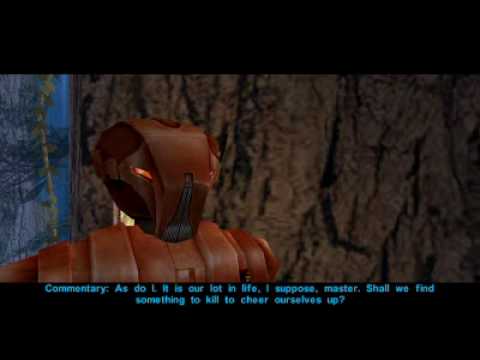 I might be biased on this one, but HK-47 is one of the best characters in all of Star Wars lore let alone just talking about the droids. I think K-2SO’s character was definitely “influenced” by HK but definitely doesn’t have quite the impact. HK-47 is a very evil hunter-killer droid built about 3600 years before the movies take place. HK is a squad member in the Knights of the Old Republic games and appears again in a few various forms of media. He serves the Sith Lord Revan loyally and has plenty of dialogue like the screenshot above. There is an endless number of YouTube videos about this wonderful character and all the hilarious quotes, but I’ll just use this one short conversation.

Also, I don’t know who needs to read this but C-3PO sucks.