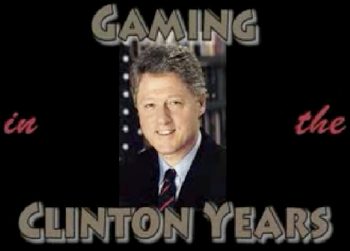 Today, I get most of my entertainment from YouTube. Around 2007, I discovered the site and began watching stuff like Angry Video Game Nerd, Nostalgia Critic, and stuff from the folks at ScrewAttack. However, there was one show that I watched that looking back at it, I can’t help but be confused and entertained. That show is Gaming in the Clinton Years.

This series is bizarre in terms of its content and its history. After I watched some episodes back in the day, I found out that it was actually a public access show from the 90’s called Flights of Fantasy. The host of the program was the enigma known as George Wood.

His reviews of the games and his jokes have often been the subject of ridicule over the years. Videos such as his reviews of Donkey Kong Country and Tomb Raider II have extremely weird lines. For example, he so delicately claims that if you don’t play DKC, “YOU ARE STUPID!”

Perhaps no video on the channel is more controversial than the episode comparing Resident Evil and Super Mario 64. Wood states that they are the signature games for the PlayStation and Nintendo 64, respectively. As you can probably guess, he didn’t take into account that those two games are as unlike each other as two games can possibly be. One’s survival horror, the other’s a platformer. The backlash was justified.

The reason these videos are even on YouTube is that the National Academy of Video Game Trade Reviewers, or NAVGTR, picked up the tapes and put ‘em online. Since then, they treat Wood almost like they’re trying to make him a meme. They uploaded more videos with him, including a weird game show and compilations.

And, in an effort to gain sympathy for him after backlash, they even told us he was dead.

They’re not the worst videos in the world, but they definitely do leave a bit of a bad taste. The fact that NAVGTR lied about Wood’s whereabouts combined with everything else makes me think that something fishy is behind all this. However, I can’t exactly say that I regret watching them. They may not be very good, but they were certainly entertaining. Take a look at them yourself, or YOU ARE STUPID!